Below is a summary of Chapter 1, which includes sections on primary energy—including trends in consumption and trends in consumption by fuel (oil, natural gas, coal, nuclear, hydro and non-hydro renewables)—delivered energy by fuel and sector, electricity generation (by fuel and by renewables), greenhouse gas emissions, and energy and the economy. You can download the full summary, the full chapter or the full study via the links on the right.
World energy consumption has more than tripled since 1965 and continues to grow. Although rates of growth have slowed in developed nations, where per capita consumption rates are already very high, countries like China and India are growing at 3% to 5% per year. Canadians are large consumers of energy, with per capita consumption of five times the world average, 29% higher than the US, and nearly triple that of the European Union (see Figure ES1). 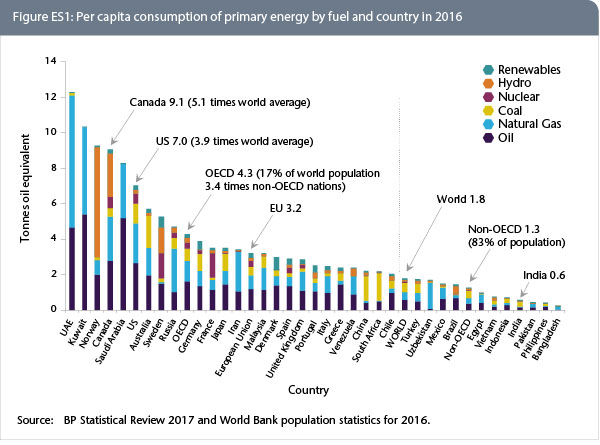 Fossil fuels currently provide 85% of global primary energy, with most of the balance provided by hydropower and nuclear energy. Only 3.8% of the world’s energy was provided by non-hydro renewables such as solar, wind, biomass and geothermal energy in 2016. In Canada, as noted earlier, 63% of primary energy was provided by fossil fuels in 2016, even though Canada is the second-largest producer of hydropower in the world. Non-hydro renewable energy provided just 3.1% of Canada’s primary energy in 2016, despite high rates of growth in wind and solar (see Figure ES2). 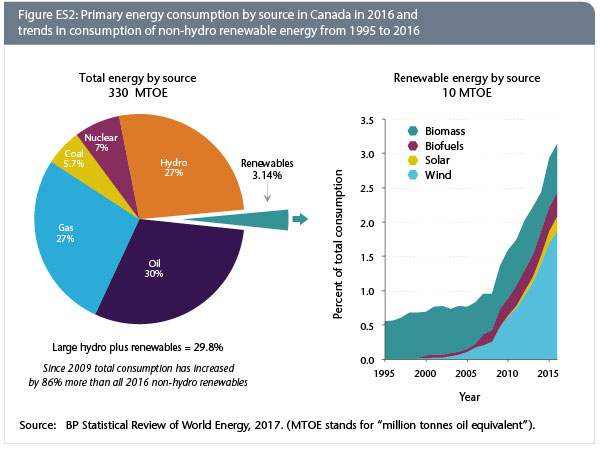 On a per capita basis, Canadians consume:

Canadians are also large consumers of electricity, with a per capita generation of 5.5 times the world average (see Figure ES3; note that some of this is exported to the US). Most strategies for a low-carbon future call for large increases in electrification provided by renewable energy sources. In Canada’s case, 76% of end-use energy is currently provided by fossil fuels with just 17% provided by electricity. Electrification of the transportation, industrial, residential and commercial sectors to the maximum extent possible will be crucial in meeting Canada’s emissions-reduction targets. 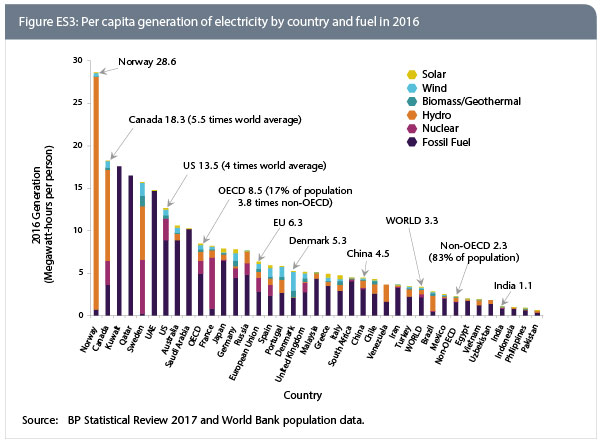 Although Canada has considerable additional capacity for new hydropower dams, a major build-out would be difficult given the ecological impacts and public opposition. Non-hydro renewables such as solar, wind, biomass, biofuels and geothermal energy are viewed by many environmental groups as feasible replacements for fossil fuels, however they currently provide just 6.1% of electricity generation and 3.1% of primary energy consumption.

Over the past five years, solar generation in Canada has grown at 105% per year but in 2016 provided just 0.5% of generation. Wind has grown 30% per year over the same period and provided 4.1% of generation in 2016. Biomass burning provided the remaining 1.5% (biomass is considered carbon neutral even though initial emissions are equal to or greater than coal). Although solar and wind are projected by the NEB to grow considerably in the future, most of the gap left by retired nuclear reactors and coal plants is projected by the NEB to be filled with natural gas.

Scaling non-hydro renewables to replace a major portion of current non-electric delivered energy presents a very significant challenge. Canada is well below the world average in terms of the percentage of electricity generated from non-hydro renewables, as Figure ES4 illustrates. Aggressive policy initiatives such as Germany’s Energiewende have increased non-hydro renewables there to 26%, but parallel policies to eliminate nuclear energy have also increased coal consumption and limited actual carbon emissions reductions. 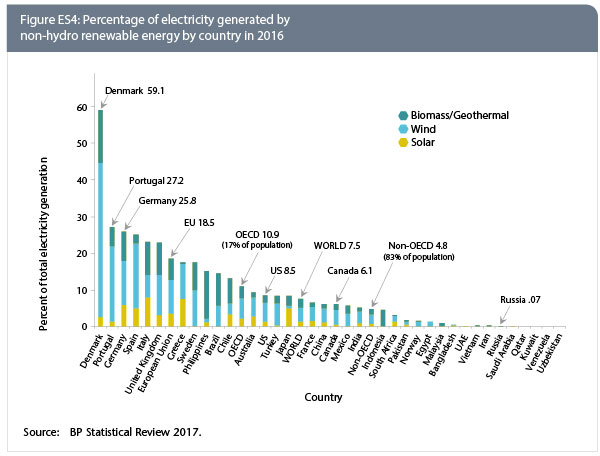 In terms of carbon dioxide emissions, Canada ranks very high, despite its large component of carbon-free hydropower and nuclear. On a per capita basis Canada emits 3.2 times the world average—this is more than double that of China, the largest consumer of coal in the world, and eight times the per capita emissions of India. The good news is that Canadian emissions have been falling, along with emissions in most of the developed world. Over the past five years, Canadian emissions fell at 1.9% per year on a per capita basis and 0.9% per year on an overall basis. By contrast, emissions have been rising on an overall basis 0.6% per year globally, 0.7% in China and 6.1% in India. Given their much higher per capita emissions, Canada and the rest of the developed world will need to have more to offer in meeting emissions-reduction targets than developing nations, whose per capita emissions are already relatively low. 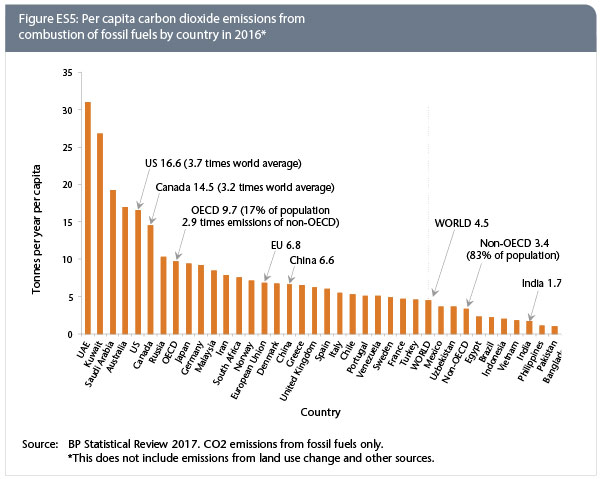 Consumption of energy and resultant emissions are highly correlated with economic activity. Although carbon dioxide emissions per dollar of gross domestic product (GDP) have been falling (emissions intensity has declined at 2.1% per year globally and 2.5% in Canada from 2011 to 2015), along with energy consumption per dollar of GDP (energy intensity has been declining at 1.8% per year globally and 1.3% in Canada from 2011 to 2015), GDP has been rising, such that energy consumption and emissions are still rising globally when combined with population growth. Emissions improvements per unit of energy consumed are far more muted (see Figure ES6). The ratio of emissions to energy provided has fallen 0.3% per year globally from 2011 to 2015 and 1.3% in Canada. The greatest improvement has been in Denmark, at 3.3% per year over this period, due to aggressive implementation of wind and solar. Yet in 2015 Denmark remained 38% higher than Canada in emissions per unit of energy provided to the economy thanks to Canada’s large component of hydropower. 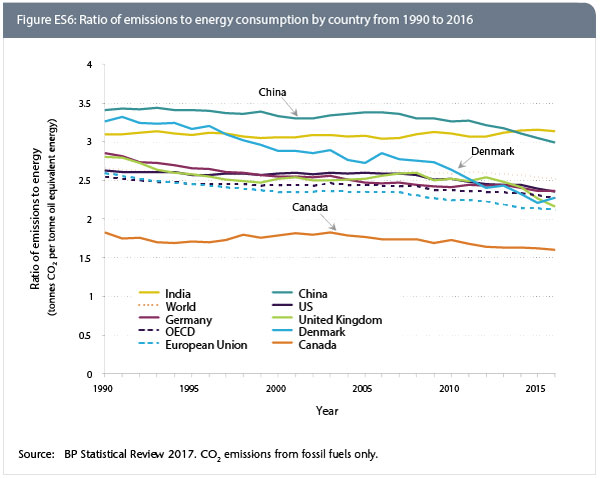